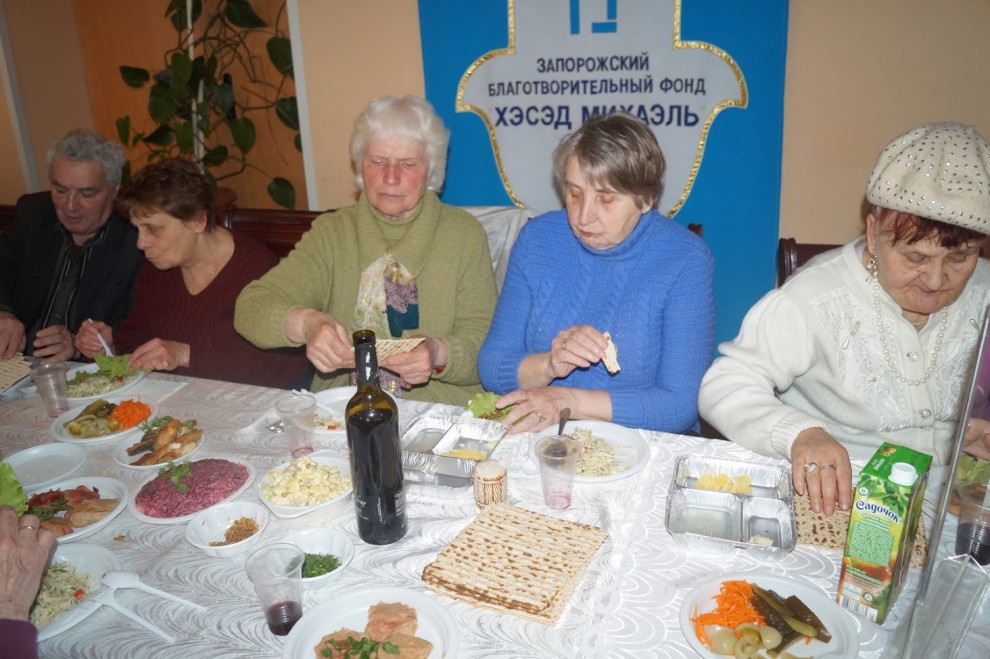 The JCFR supports our sister city, Zaporozhye in Ukraine.  We wanted to share this story about how the Zaporozhye Jewish community celebrated the recent Passover holiday.

Over 230 elderly participants and 30 young Hesed volunteers joined together to celebrate Passover in Zaporozhye, Ukraine.  Two large Seders, each for 130 participants, were held at the local community center and they were led by legendary Hesed volunteer – Luba Vysochina.

Luba is 84 years old and she has dedicated the last 20 years of her life helping the Zaporozhye Hesed center, from the first days of its existence. Her grandparents were killed by the Nazis in 1943 in occupied Zaporozhye and Luba experienced the horrors of evacuation as a 9 year old child. Her parents though raised in very traditional Jewish families, had no chance to freely and openly keep Jewish traditions or give Luba any Jewish education in the years of Soviet regime following the Holocaust. She received  access to Jewish books only at retirement age, when the Soviet Union collapsed and Jewish life started slowly to revive in Ukraine.

She was so thirsty for any Jewish knowledge and learned so eagerly, that she soon became one of the few Zaporozhye Jews holding a deep knowledge and understanding of Jewish tradition.   “It happened so that when I first heard about Hesed Jewish center in Zaporozhye – it was my father’s birthday. I thought then he was sending me a message that I should go there. Since that day more than 20 years ago, I’ve been sharing my knowledge with people who come to Hesed in the memory of my perished grandparents and parents who never had a chance to have Jewish life”

Leading Jewish holiday events and especially Seders for Hesed program participants has been her honored volunteer duty for many years but this time she was a teacher & student at a time.

“You know, I’ve been educating people about Jewish tradition and leading Seders for a while – I thought I know everything perfectly and even created my own style of explaining Pesach history and all Seder procedures in poetry that I wrote myself… However, this time I learnt something completely new – I shared my leadership with young kids who came to help with the Seders and wanted to learn from me how to lead such event. It was very different from explaining people the Pesach tradition from scratch as you usually do it at Seders – as these kids surprised me with their great knowledge of the history, traditional procedures and even Seder songs. It was completely different responsibility - to teach them teach the others - especially when the “students” were the age of their grandparents. And I so much loved the idea to pass my skills and knowledge to the kids and share with them the Mitzva and honor of leading Seder Pesach. That means there is a real continuity and I see the Jewish Future in the eyes of these great kids!”