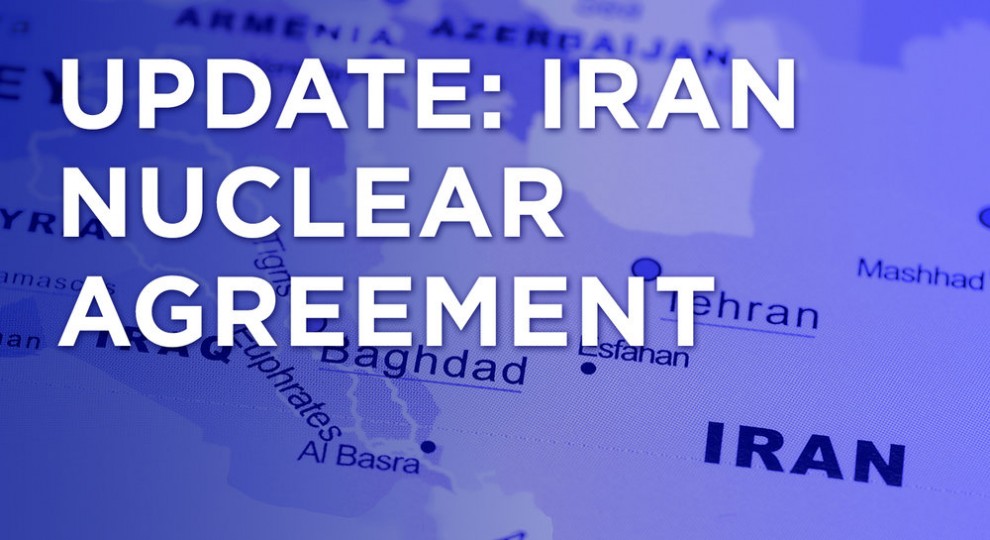 The Jewish Community Federation of Richmond plans a JCRC Community Forum on the Iran Accord in August. The date and details are being finalized including speakers. Community members should expect this information via the e-news, Facebook, Twitter, and posted on the Federation’s website www. jewishrichmond.org.

The focus of the gathering will be to further educate and inform the community about the details of the Joint Comprehensive Plan of Action announced July 14.

The forum meeting concept was decided following a “hybrid” meeting of Federation board members and the Jewish Community Relations Committee on July 21. Frances Gold- man, JCRC chair, led the gathering. Doni Fogel, the new JCRC director and Israel & Overseas Programming for the Federation, briefed them on the Iran Accord. He reviewed the history of the negotiations, the strengths and weaknesses of the accord, public opinion since the announcement of the accord and more.

Richard Samet, JCFR president, said, “This is not the deal we would have negotiated. It’s important we hear from the community and share the details of the accord.”

In addition to stating clearly this is not the deal they would have negotiated, the consensus of the group is it is vital to show support for Israel and be vigilant in protecting Israel.

Fogel said, “It is imminently clear the deal leaves Israel and the rest of world with some very legitimate and significant concerns.”

He described a number of strengths and weaknesses based on nearly a week of reading the 159 page document, Internet research and participating in several conference call briefings by Vice President Joe Biden, former Ambassador Dennis Ross of the Washington Institute for Near East Policy and Mark Dubowitz, executive director of the Foundation for Defense of Democracies.

Fogel said, “The bottom line for 15 years it will be extremely hard for Iran to be capable of producing nuclear weapons. There will be unprecedented, extremely intrusive, 24/7, inspections of the entire supply chain for 25 years covering mining, milling, conversion and enrichment. These elements, combined with a limit to the number (5,060) and type (IR-1) of
centrifuges. push Iran’s nuclear breakout capacity to one year.”

However, he also outlined several key weaknesses of the deal:

• $100-150 billion to be released to Iran upon qualification (likely in 6-12 months), which will likely, at least in part, aid Iran sponsored global and regional terror
• In 15-25 years, Iran winds up back at its present position vis-à-vis breakout time of 2-3 months
• The lack of anytime, anywhere inspections of undeclared, suspect sites
• The legitimization of Iran’s nuclear program and the potential for a resultant nuclear arms race in the Middle East
• Lifting of sanctions on arms and ballistic missile sales and R&D
• Permission granted to Iran for R&D on more advanced centrifuges
• P5+1 nations are prepared to teach Iran how best to guard their nuclear facilities from physical attacks and potential sabotage
• Lack of consequences to marginal, if non-material, breaches of the accord on Iran’s part

Before presenting the position of Israeli politicians, Fogel noted, “Israel politicians are almost never united in their analyses; in fact the coalition and the opposition exist to proffer alternatives to each other. When their positions align, it’s worth taking note.” He noted near unanimity amongst Israeli leaders in opposing the JCPOA and in condemning the accord.

Fogel then shared a number of statements from several Israeli party leaders. Prime Minister Benjamin Netanyahu (Likud) stated, “The bottom line of this very bad deal is exactly what Iran’s President Rounai said today: ‘The international community is removing the sanctions and Iran is keeping its nuclear program.’ What a stunning historic mistake!”

Opposition leader and chair of the Zionist Union party, Isaac Herzog, concurred: “...the picture that comes out of Vienna is extremely disturbing and worrying as it relates to Israel’s security and regional security as well .... The agreement that was signed with the Iranian kingdom of terror is a dangerous agreement.... This agreement is bad for Israel’s security in the future... and bad tomorrow morning. And as it comes to security there is no daylight between me and the Prime Minister of Israel.”

Goldman noted, “It is clear this accord, will not make us friends with Iran.”
The group discussed their many points of concerns and reservations with the accord focusing on the $100-150 billion Iran will receive and how it will fund terrorist groups.

In discussing a community forum, the group agreed there are many complex issues with the accord and the Federation leadership should hear from the community and advocate for issues important to the Jewish community.
“Our role is to educate,” said Seth Kaplan, JCFR vice president. “The Federation should be the go-to-place for information and work with all community leaders.”

“It’s important we share the issues with the community and this fulfills our role as the Federation,” Samet added. “We need to explain the terms of this complex deal so the community understands. Our obligation is to share what we know and understand.”

Fogel noted U.S. Senators Tim Kaine and Mark Warner had issued noncommittal public statements noting their commitment to studying the deal. Rep. Bobby Scott (D-3rd) is neutral and is review- ing. Several U.S. Representatives have opposed the accord -- Representative Dave Brat (R-7th), Bob Goodlatte (R-6th) and Barbara Comstock (R-10th). Several others are leaning against and have not is- sued statements opposing. Rep. Don Beyer (D-8th) issued a statement in favor of the accord.