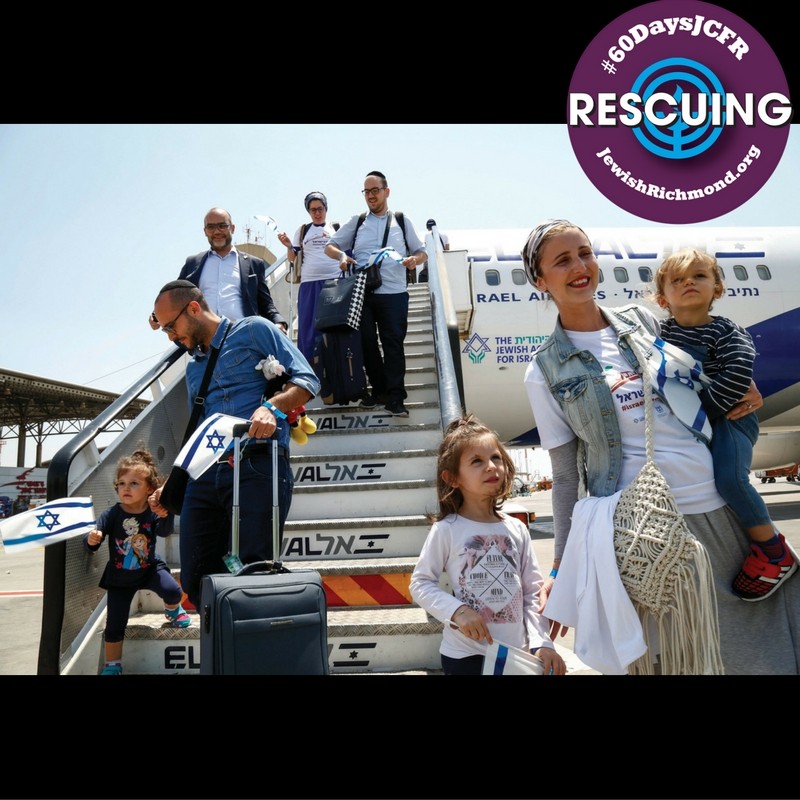 The Jewish Agency for Israel (JA) helps bring Jews from all over the world to build their home in Israel. Whether they are fulfilling a dream or escaping a nightmare, JA efforts have brought more than 3 million Jews to Israel since 1949. They continue this work today.

Your donation to the Jewish Community Federation of Richmond helps support JA.

In Their Own Words – New Olim From Ukraine & France

THE DOMBROVSKY FAMILY of Donetsk

As is typical among Ukrainian immigrants to Israel, this couple had worked hard and achieved great career success in the Ukraine when their plans for the future were nullified by the war. In Donetsk, Igor owned a food store, and Vita held a top position in the business sphere. They owned a nice apartment, a summer cottage and a car. They were happy and optimistic, but the war devastated the economy, and even well to do people could hardly make ends meet. Vita lost her job, and at the beginning of 2015, Igor had to close his store. They understood that they would need to do something dramatic to improve their future and went to The Jewish Agency’s office in Donetsk.

Igor: At The Jewish Agency, we met Boris who explained to us everything about the steps we’d need to take and how to prepare for Aliyah. We immediately enrolled in the Jewish Agency ulpan and started to learn Hebrew. We want to extend a special ‘thank you’ to our wonderful Hebrew teacher, Albina. We went through the long process of collecting the required documents, including one that was missing. We had to go to an archive outside of Donetsk, which required going through numerous checkpoints. Finally, we completed the process and were interviewed by an Israeli consul at The Jewish Agency. Then Boris organized our transportation and residency at the Mayak Center . .

I am almost 50. I’ve always thought that miracles happen only in fairy tales. But when we arrived at Mayak, I realized I had been mistaken. It’s a wonderful, warm, safe place with good accommodations and great food, a supportive, professional staff and an encouraging atmosphere – and all that for free . . . We could hardly have expected such a welcoming reception . . .

Our journey to our Jewish homeland is almost complete. During this journey, we have already met and gotten to know a few people who have helped us, and I know there are many others at The Jewish Agency and beyond, who do so much to help people and families like us, to once again have a home and build a new life in Israel, our homeland. We are deeply grateful to everyone who supports and helps Aliyah. Thank you so much!

THE ORLOVY FAMILY of Luhansk

Anna: When the war started in 2014, I was expecting a baby, and we decided to flee to our relatives who live in the town of Kirovograd, Ukraine. We lived there for almost a year and a half. We missed our home a lot, but we understood there is nothing there.

Life in Kirovograd was not easy. Yevgeny’s salary could hardly cover our rent, and finally we returned to Luhgansk in the autumn of 2015. It was a different city from the one we recognized. Life there hardly resembled the life before the war. There were no jobs, no way to earn a living, no future for our child . . . We considered all our options carefully and decided to try and start a new life in Israel – a country we love – and where we can have a future.

After the horrible journey through the checkpoints, we were met by wonderful people and were provided a neat room at the Mayak Center and good meals. And here we are, at the Mayak Center, on our way to Israel! We are so grateful to all of those involved and to those who assist this great enterprise of Aliyah to Israel. We cannot wait to see our new homeland, and we’re doing everything we can to make that moment come as soon as possible.

THE IGNATIEV FAMILY of Donetsk

The Jewish Agency arranged the necessary documents to enable this family of five to cross checkpoints into Ukrainian territory. Volunteers drove them from Donetsk to the Mayak Center in Dnepropetrovsk – the journey, which usually takes two and a half hours, now takes 9 to 12 hours. They spent five hours at the checkpoint to enter the Ukraine. They made Aliyah in June of 2016.

The Ignatiev Family: We want to extend a big ‘thank you’ to Boris from The Jewish Agency and to our volunteer drivers, Veniamin and Viktor, and to all the staff of the Mayak Center for their professionalism and their tremendous help to people from the war zones of Donetsk who want to make Aliyah.

Without your devotion and help, this would not be possible. We are so deeply grateful to everyone who has helped our family on our way to Israel.

An emotional family reunion at Ben Gurion Airport as a family reunites in Israel as her brother- and sister-in-law were among the 201 immigrants arriving on the season’s biggest Aliyah flight from France.

BEN GURION AIRPORT, Israel – On a hot July day, hundreds of people enthusiastically wait in the shade of a hangar in Israel’s international airport. Live band music and a celebratory spread of food greet the crowd. They chat in French and Hebrew, anticipating a flight of new arrivals from France.

“I’m very excited,” says Reine Gozlan as she waits with her 11 year old daughter, Eva.“I feel that our family is about to be reunited, and it took nine whole years.”

Reine’s sister-in-law, Laure, waits with her 18-month-old son, Charlie. Laure wipes away a tear. Today their sister-in-law Judith and her family would join Reine, Laure, and their own families as Israeli citizens.

Nine years ago, Reine Gozlan moved to Israel with just her husband and daughter. This summer brought her an emotional family reunion at Ben Gurion Airport, as her brother- and sister-in-law were among the 201 immigrants arriving on the season’s biggest Aliyah flight from France.

Although the family reunion is joyous for Reine, she recalls that her decision to make Aliyah nine years was driven by a horrific crime that shook the French Jewish community. On January 21, 2006, an anti-Semitic gang in Paris kidnapped 24-year-old Ilan Halimi. Over a period of three weeks, he was tortured and then murdered.

“That murder led me to make the decision to leave. We heard about this incident, and it terrified us,” she said.

Shocked by those events, Reine and her husband began attending an ulpan (intensive course in Hebrew) at the offices of the Jewish Agency for Israel in Paris and researching the logistical aspects of Aliyah. “My husband looked for work in Israel before we made Aliyah, and as soon as he found work we got on the plane,” she recalled. “That was two months after we had made the decision to immigrate to Israel.”

Like dozens of relatives of new French olim (immigrants to Israel), Reine and Laure waited eagerly for the moment when their loved ones would arrive, becoming their neighbors. 201 new neighbors, to be exact – the summer’s largest single group of French immigrants to Israel. They included doctors, pharmacists, accountants, engineers, students, retirees, and others.

In Her Own Footsteps

For Reine, the scene brought back memories of her own journey to Israel in 2007. When she arrived, she didn’t enjoy  the kind of support system that her relatives will now have. “I made Aliyah to Israel on July 24 – very close to today’s date – nine years ago,” she recalled. “I came to this same entrance, and I didn’t have family in Israel to greet me. My husband and I and [my daughter] Eva, who was a little girl, were the pioneers of the family.”

Once the crowd in the Ben-Gurion hangar heard that the plane had landed, Reine, Laure, and their families approached the entrance, where 201 of Israel’s newest citizens would soon be arriving. The crowd waited with small blue and white flags, huge signs saying “Choose Israel” were on display, and the band played Israeli songs as the crowd waited eagerly.

A bus pulled up to the hangar, bringing the first group of new arrivals to their friends, loved ones, and new neighbors waiting inside. When the second bus pulled up, Reine Gozlan saw her sister-in-law Judith and ran to embrace her. The two broke out crying, as 11-year-old Eva hugged her younger cousins, and they all headed towards the hangar.

Among the speeches welcoming the new olim was one given by Jewish Agency Chair Natan Sharansky, himself no stranger to Aliyah’s challenges and rewards. “French Jewry has a great future in Israel,” he told them. “Today, each one of you has made a great step for the future of your children and for the future of the State of Israel.”

After the speeches and the warm welcome, Judith sat in the airport with her children and her husband Anthony, all of them now Israeli citizens. She wiped away a tear and reflected on her journey. “I came to be with my family, and because this is our land,” she said. “There are many countries in the world, but only Israel is my country.”

This summer, over 5,000 new immigrants arrived in Israel with the help of The Jewish Agency for Israel, many of them from France. Home to nearly half a million Jews – Europe’s largest Jewish community – France has seen nearly 10 percent of its Jewish population make Aliyah since 2000, with half of those immigrants arriving in the past five years. In response to the heightened demand for their services, The Jewish Agency for Israel continues to encourage Aliyah, assist in the immigration process, and help olim thrive in Israel.

A donation to the Jewish Community Federation of Richmond helps The Jewish Agency for Israel brings Jews to Israel, Israel to Jews, and helps build a better society in Israel and beyond. Its vision is to ensure the future of a connected, committed, global Jewish people with a strong Israel at its center. JA’s mission is to inspire Jews throughout the world to connect with their people, heritage and homeland, and empower them to build a thriving Jewish future and a strong Israel.

For more information about JCFR and JA, or how you can help build community, contact Alissa Aronovici at aaronovici@JewishRichmond.org or call 804-545-8621.