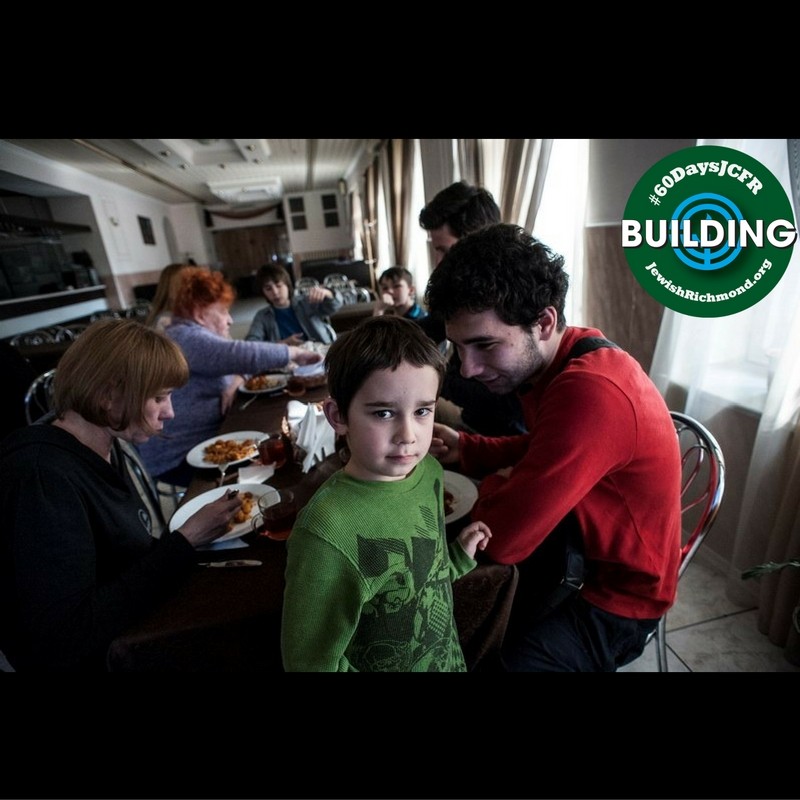 “Bad guys with guns and rockets were going boom-boom.”

That’s how Ilya Dudnichenko, 7, remembers his hometown of Donetsk. He hasn’t seen his house or city, or his father, since February 2015, when JDC helped evacuate Ilya, his mother, Tatiana, and his older half-brother, Astamur, 22,  after the family had endured months of bombing.

Well before the crisis, the family was already living on the edge  poverty, and their situation only worsened when the fighting started – not only did their income completely dry up, but Astamur was diagnosed with diabetes, and the insulin he needed was expensive and hard to come by. When JDC offered to help them escape to Zaporozhe, Tatiana and her sons jumped at the opportunity to begin rebuilding their life outside the conflict zone.

JDC helped the family move into its IDP (Internally Displaced Persons) Center – a modest hotel on the outskirts of Zaporozhe, half of which has been converted into a refuge for those fleeing the fighting. Ilya, Astamur, and Tatiana share a tiny room in the hotel – two beds, a mini-fridge and a closet take up nearly the entire space.

Ilya’s father stayed behind to protect the family’s apartment and possessions. He wanted to make sure that when the fighting finally ends the family has a home to return to or the means to rebuild their life elsewhere.

Tatiana is unhappy with her husband’s decision; she worries about him and wishes he would join them in Zaporozhe. Ilya misses his father terribly and cries for him at night.

The family is very grateful to JDC for giving them a safe place to live, and providing them with food. Their only income is Astamur’s $47 monthly pension, which he gets because his father died when he was a child. Without JDC, the family would still be in Donetsk, fighting poverty and running from periodic gunfire.

About the relief services provided by the JDC-supported Hesed network for destitute Jewish elderly in the former Soviet Union (FSU):

With the final collapse of the Soviet Union in December 1991, tens of thousands of impoverished elderly Jews lost their social safety net. Over the past two and a half decades, the situation has worsened in many FSU countries, including Ukraine: pensions have not kept up with inflation; rising prices have forced the elderly to choose between food and life-saving medicines; and government-provided medical care - if it exists - is grossly inadequate.

At times of crisis like the ongoing situation in Ukraine, JDC mobilizes its Hesed network and community partners to rescue Jewish families and elderly from dangerous situations and helps them rebuild their lives by providing accommodation subsidies, food and medical support, help  finding new employment, and homecare assistance, both for people who remain in the conflict zone and those who’ve taken refuge elsewhere. Currently in Ukraine, JDC is helping some 4,300 people in the conflict zone, in addition to 2,000 Internally Displaced Persons.