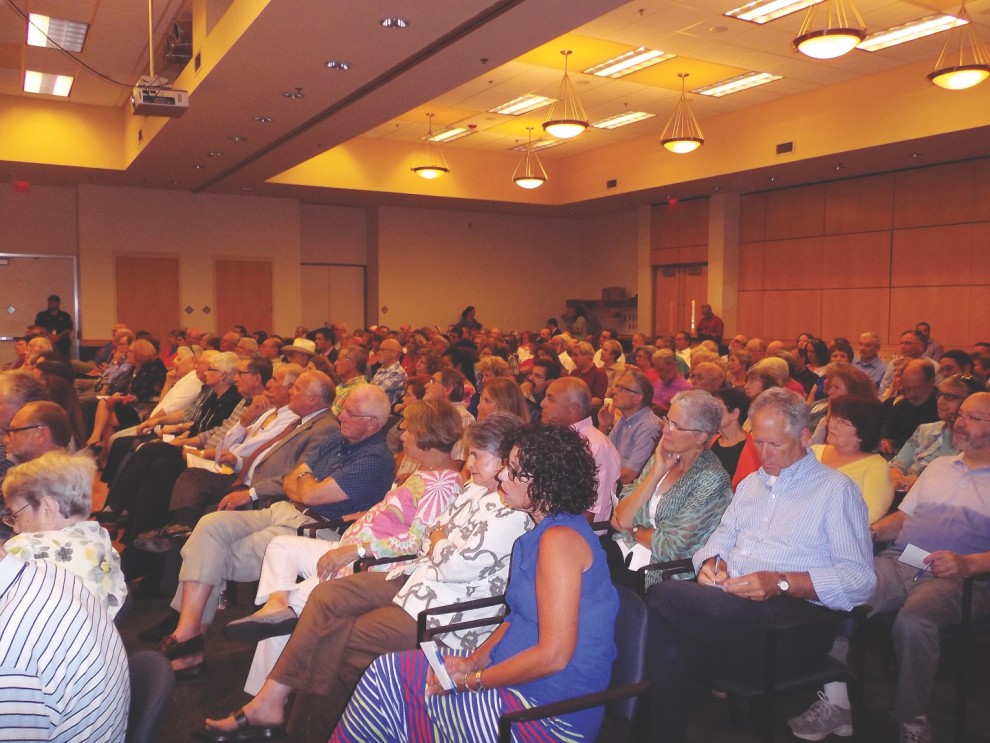 The Jewish Community Federation of Richmond on Aug. 25 held a special JCRC Community Forum on the Iran Deal. The forum featured two senior policy experts who educated and informed the community about the Joint Comprehensive Plan of Action, also known as the Iran Deal. The speakers addressed more than 225 community members via a live video conference during the approximate 90-minute program.

Acting Under Secretary for Terrorism and Financial Intelligence Adam Szubin from the U.S. Treasury Department spoke on behalf of President Barack Obama’s administration. The under secretary was involved in the talks that led to the JCPOA.

JCFR President Richard Samet welcomed the attendees at the Weinstein JCC. “Our community has gathered at this JCFR event to discuss what has been described as one of the most important foreign policy issues of the past several decades. It is appropriately dense and the commentary on it, even as new as it is, extensive.” He continued, “Our Jewish Community Relations Committee rightly is a big tent that enables us to embrace diversity. We must not forget that diversity, while not always comfortable, strengthens us.”

Samet explained the announced speaker from AIPAC, Ambassador Brad Gordon, was not able to address the community,   and Beckerman, his deputy, had stepped in that afternoon.   Samet thanked Elliot Mendes, AIPAC’s Southeast regional director, for also attending the forum and continuing the discussion with community members after the forum.

Szubin, who has been working on the Iran issue since 2006,  called the deal “strong for the U. S. and for Israel, and puts us all in a more secure position vis-a-vis Iran and the region.”

He explained, prior to 2005, the U.S. had worked for a long period to “devise a strategy to increase pressure on Iran to curtail its nuclear program.” This included putting sanctions in place but they had little effect on Iran reducing its nuclear program.

“In the 2005-2006 period,” he said “it seemed every month they were adding more centrifuges, adding more to their uranium  stockpile. That progress continued while the sanctions were racketed up.”

He said in 2008-2009, Iran’s “breakout time had shrunk pretty rapidly and they were down to 4-5 months before having enough material for one nuclear bomb.”

He said stronger sanctions were rapidly added against Iran by the U.S. and its allies. “These were quite profound and effective.”

As a result, talks moved ahead by the U. S. and its partners in the UN Security Council, plus Germany,  and an interim  deal was reached with Iran in 2013.

Szubin noted Iran, at that time, “was 2-3 months away from having enough material for a nuclear weapon -- as they are today.” He called this “the ultimate national security threat.”

Under the JCPOA, “we will be watching Iran like hawks ... there are strong teeth in the deal ... and there are no signing windfalls.”

In response to community members who submitted questions, he noted  “snapback sanctions  could be put in place quickly. We have a sword over their heads if they break the deal. A threat of crippling sanctions will stop them from violating the deal.”

He explained the amount of funds Iran will receive in “the middle of next year is really in the range of $50 billion not the $100 to $150 billion figure some have stated.”

“These are their foreign reserves held by China, India, South Korea and we cannot stop the money from going back to Iran. We believe a great majority of funds will be used for domestic needs and infrastructure.”

In response to other questions, Szubin said it was a “not a perfect deal,” “it’s too late to amend the deal” and noted “more than 90 countries support the deal.”

He added the U. S. would continue to work with Israel and other countries to ensure Iran does not expand its terrorist activities.  “We will watch them closely.”

In his remarks, Beckerman told the community he strongly objected  to  “the Iran Deal since it does not achieve its objective. Yes, it provides temporary restraints on its nuclear program but the inspection aspects are very weak.”

He noted, “Iran will get massive sanctions relief next year.” He disputed the $50 billion figure noted by Szubin.  “It’s really $100 billion.”

Beckerman explained Iran has borrowed money in the past several years and under the terms, it has agreed it would pay it back from the $100 billion. “But they will get the full $100 billion and do you really expect they will pay back the loans?”

He agreed a substantial amount of the money will be invested in the country “but if they only provide 5 percent to terrorists, it would double what they are currently providing.”

Beckerman also said the snapback provisions in the deal will not work. “Minor violations will not result in snapbacks ... and they expire in 10 years.” This comment refuted an  earlier statement by Szubin who noted sanctions could be stepped back quickly and proportionality to more minor violations by Iran.

Beckerman added, “and even if there are snapbacks imposed, once they get their $100 billion, they would have little impact on Iran.”

He said “inspectors cannot just go anywhere ... and we have no baseline to start with in many areas.”

The speaker agreed their nuclear program might be limited “if they abide by the deal, but they have never abided by past nuclear deals.”

He noted, “I don’t trust the Iranians. The consequences of this deal are not only dire for Israel but for the U. S.”

The AIPAC speaker said, “after 15 years, their nuclear program could move rapidly ahead without little stoppage and they could have three nuclear weapons within a year.”

In response to questions, he said recent polls in the U. S. showed greater opposition to the deal in swing states.  He also pointed out a substantial number of former military leaders in the U. S. are expected shortly to come out publicly to oppose it.

Beckerman said many former  military leaders and others who support the deal often point out objections to certain aspects of it.

He called for the Congress to oppose the deal and suggested new  sanctions could be imposed against  Iran if Congress rejected the deal.

“We are a $17 trillion economy and Iran is a $400 billion one. Oil prices will continue to put pressure on their economy.”

In response to a question, he said Europe’s sanctions on Iran have posed a greater deterrent to the country than some from China and Russia,  and if our allies there would support the U. S., new sanctions could have an impact.

He said he did not object to every aspect of the deal. “There are some good aspects that could go forward.”

However, he emphasized Iran’s support of global terror has continued and will not end with this deal.

Community members applauded each speaker and were respectful in the packed Israel November auditorium with many standing during the forum.

During the program,  community members filled out a total of 60 note cards with questions. Each speaker had time to answer roughly 5 questions.

“Undeniably, the weeks since the president’s announcement in July have been challenging for our Jewish community in Richmond and for the national Jewish community.  Both of our presenters spoke compellingly about how their cause was for the safety of the United States,  the State of Israel, and indeed the world. Many times, Federations unite forming one voice of the organized Jewish community across America. For better or worse, this is not one of those times,” she said.

“The Jewish Community Relations Committee has multiple roles in these situations. I would sum them up in four words, borrowing from Yehuda Kurtzer, president of the Shalom Hartman Institute of North America, and they are: convening, educating, organizing, and leading. Tonight, we have accomplished all of these goals.

“By making the Federation and JCRC the Richmond community’s space for this deliberation, we are working toward gathering our entire community for civil discourse on the salient issues crucial to our continued existence as a Jewish Community. We welcome the various Synagogues, agencies, and individuals and thank the Rabbis and lay leaders for recognizing the value in joining together for this forum.

As Richard said, we are enormously proud of tonight’s event. Educating our community is at the heart of what we do and regardless of any one person’s beliefs on the JCPOA, our experts tonight provided an excellent education.

“Kurtzer’s last two points, ‘Organizing our Community’ and ‘Leading it successfully,’ point to the question that faces every Jewish Federation these days, now what? This is not a simple question. Many, many factors weigh in on the Federation’s lay and professional leadership.

“Allow me to share just two for example -- What does Federation and JCRC policy state about making statements regarding policy issues? The long standing policy of the Federation and its JCRC has been to make statements regarding policy only in areas of consensus. When contentious issues arose in the past (and this is hardly the first contentious issue to arise) the Federation and its JCRC did not issue a statement. The leadership led toward consensus, understanding that even as passions (and a few tempers) rose, the risk of alienating and splitting our community was not worth the potential gain of any given statement.

“What happens if the JCFR issues a statement? Where is our political clout next time?  To paraphrase Mr. Kurtzer, leadership used well can result in inspiring, motiving and achieving transformative outcomes while maintaining – if not strengthening – a community through change.

“The JFCR will continue to convene, educate, organize and lead.”

She thanked the community members, the guest speakers Adam Szubin and Steven Beckerman, and Elliott Mendes from AIPAC  for his attended.

“And I want to thank you, our community for gathering to hear these experts and for your active participation.  I am sure we will continue to hear from our community in days and weeks to come. We welcome all those who care passionately.”