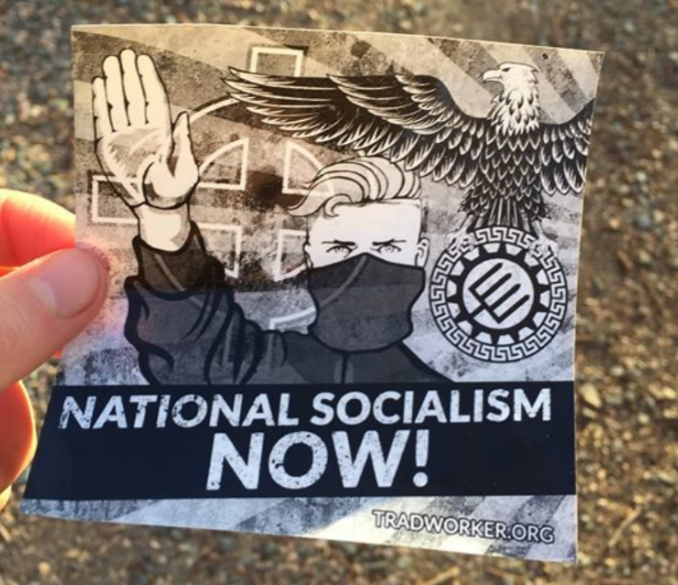 The flyers, (pictured) depicted the Nazi Eagle, a man flashing the Hitler Salute, and the white supremacist version of the Celtic Cross. Each of these symbols is anti-Semitic. The flyer reads, “National Socialism NOW!” and calls for supporters to visit a prominent American neo-Nazi website of the “Traditionalist Workers Party” (TWP).

National Socialism is one of the largest neo-Nazi groups in the United States. According to the Southern Poverty Law Center, “the Traditionalist Worker Party is a white nationalist group that advocates for racially pure nations and communities and blames Jews for many of the world’s problems. Even as it claims to oppose racism, saying every race deserves its own lands and culture, the group is intimately allied with neo-Nazi and other hardline racist organizations that espouse unvarnished white supremacist views.”

These flyers have been reported to relevant local police depart.ents, the Virginia State Police Fusion Center, the Anti-Defamation League and the Secure Community Network.

Anyone who sees anti-Semitic flyers or other neo-Nazi material in the community should report them to law enforcement’s non-emergency phone line and to the Jewish community security coordinator, Daniel Fogel, office: 804-545-8626, cell: 860-997-7426.

Be sure to note the location you see the anti-Semitic material, the date and the time. If possible, take a photo of it (use your cell phone). If you observe someone distributing such material, DO NOT approach him/her. Dial the police and as soon as it is possible, contact this office.

The expression: If You See Something, Say Something™ is not a cliché. It saves lives. Anyone observing suspicious behavior of any kind should IMMEDIATELY DIAL 9-1-1. As soon as feasibly possible, please notify this office. Informing each other of what we see can keep us safer.

The Jewish Community Relations Committee’s director coordinates security in the Jewish community. To that end this office regularly liaises with the local police departments, Virginia State Police, FBI and Department of Homeland Security, the Anti-Defamation League and the Secure Community Network. SCN is the official, national Homeland Security initiative of the Jewish community, under the auspices of the Jewish Federations of North American and Conference of Presidents of Major American Jewish Organizations.